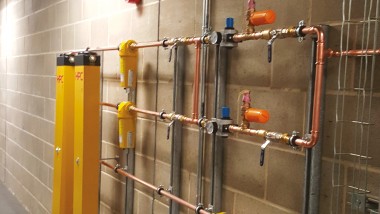 The MRC Laboratory of Molecular Biology (LMB) is one of the world’s leading research institutes. Its scientists are responsible for many pioneering techniques, working to advance the understanding of biological processes at a molecular level, in order to solve key problems in human health.

In early 2013, the LMB moved into a new purpose-built building. Costing £212 million, the building provides first-class facilities to some of the world’s leading scientists, located in the hub of one of the largest and most internationally competitive concentrations of healthcare related talent and enterprise in Europe.

Although a relatively new building, in January 2016 compressed air piping needed installing to match an existing copper system in the building. The original was fitted using silver soldered fittings, but the work needed to be completed while the building was occupied and safety was a high priority so soldering, which requires hot works, was not a suitable option.