The Design Museum and Hollandgreen 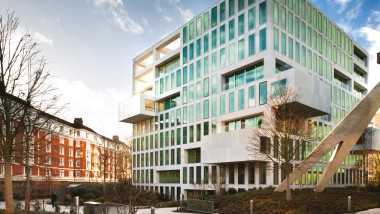 The Design Museum and Hollandgreen apartment complex is an exciting new mixed use development in West London, located at the southern end of Holland Park on Kensington High Street. The development consists of three residential blocks grouped around the museum, with accommodation comprising 56 one to five bedroom flats, together with larger individual penthouses. This unusual project combines public sector museum use with super prime private residential living.

The Design Museum is now housed in the completed redevelopment of the original Commonwealth Institute building; a distinctive Grade II* listed Modernist building which had stood vacant for over a decade.

The shell of the building has been transformed by architects, OMA and Allies and Morrison, with Arup providing the structural design to allow the building to be fully reconstructed below the roof line whilst retaining the 1,500 tonne roof on temporary works. John Pawson architects subsequently designed the fit out of the Design Museum, upgrading it to meet the demands of the 21st century, whilst retaining its unique spatial quality, including the regeneration of its original pavilion. The internal views to the eye-catching hyperbolic parabaloid roof have also been maintained.

Significant and complex refurbishment works included the wholesale reconfiguration of the structure and basement excavation to increase the floor area. The facades were completely replaced to fulfil contemporary building standards, with the glazing redesigned to allow controlled daylight into the museum space, while preserving the pattern and blue-glass appearance of the original building.

Linking the Design Museum with Hollandgreen is landscaping that reinterprets the original features of the Commonwealth Institute, including significant trees along the edge of Holland Park and Kensington High Street. These green spaces between the museum and residential areas, allow the city and park to infiltrate each other, providing a change of pace to the busy Kensington High Street.

The apartments themselves comprise three stone cubes that respond to the geometry and grid of the museum, in particular the 45 degree angle at which the old Commonwealth Institute’s pavilion is set to the street. Projecting box-like rooms called ‘sky boxes’ have been incorporated to maximise views and flat, repetitive elevations are offset by corners eroded in stepped terraces onto ground floor porticoes.

Each block ranges from seven to nine storeys high, including a secure basement car park, spa featuring a pool, sauna and steam rooms. On the lower levels there is also entertainment in the form of a cinema, private function area, golf simulator and a children’s playroom.

Residents enjoy the benefits of a concierge service, restaurant food delivered to their apartment, personal transport, valeting, housekeeping and IT support.

Hollandgreen and the Design Museum that it surrounds, is a unique and extremely high end luxury project, requiring quality solutions that meet the demands of its customers and,at times, a very challenging brief. Geberit products were used extensively throughout the build,across a range of applications. Mike Carter from Arup, who was heavily involved in the design and specification process, explains his decision making.Bringing a spa-like feeling into the bathroom Geberit AquaClean Sela brings together modern standards of hygiene and design, with an intelligent shower function, power supply and water connection all integrated into the pan making them virtually invisible. Cleaning with a gentle,airy water spray at body temperature, Geberit AquaClean Sela is simple to operate via the controls on the side of the WC or with a remote control.In this exciting development, Geberit has demonstrated the breadth and versatility of its building services and sanitary products, providing modern solutions that remain sympathetic to historic and architecturally challenging features while meeting the needs of 21st century customers that demand the very best in design and functionality.